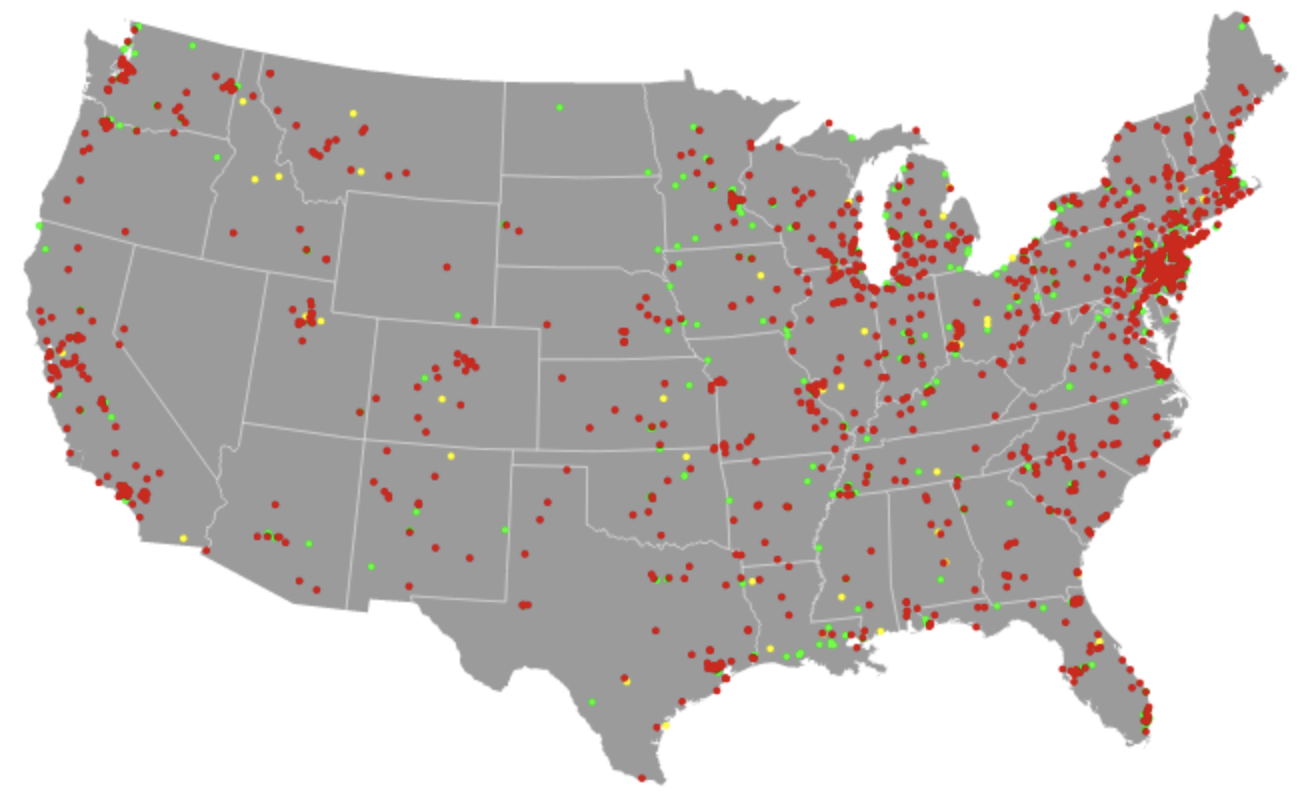 This week, an Alabama Grand Jury handed down felony ethics charges against Region 4 EPA Administrator, and Trump appointee, Trey Glenn, for allegedly attempting to assist a coal company with avoiding liability for cleanup under the Comprehensive Environmental Response, Compensation, and Liability Act, also known as the Superfund.

The Superfund is a law, which allows the U.S. E.P.A. to recover damages from companies and organizations that pollute the environment.  The Superfund has also been continually plagued with allegations of mismanagement, corruption, and failure to effectively clean-up toxic spills.

The Trey Glenn affair is not the first time the Region 4 US EPA, or the US EPA, itself, has come under fire for corruption allegations.

The Ashville CTS Superfund site, a plume of Trichloroethylene in the groundwater, is a site where US EPA scientists told residents, for nine years, that they were safe from the toxic plume of groundwater until residents formed citizens actions groups to force the US EPA into action.

US EPA officials, under Presidents Bush, and Obama were alleged to have trespassed on citizens property, to conduct groundwater testing, while claiming that there was no danger to the community. Citizens fought until the corruption was exposed, causing the entire neighborhood to be evacuated when it turned out the plume actually was a danger to the health and safety of the affected residents, something the Region 4 EPA had known about for almost an entire decade.

Famously, the Region 5 US EPA Administrator and Obama appointee was also forced to resign after the Inspector General’s Office found the office to be partially responsible for for the Flint Water Crisis, for failing to act when Region 5 officials became aware of the high lead levels in the drinking water in Flint, Michigan.

In Colorado, under the Region 8 EPA, EPA contractors were found to have been directly responsible for the Animas River Mine Spill after busting a hole in the Gold King Mine, north of Silverton, Colorado.

The incident triggering hundreds of millions of gallons of mine waste to flood a tributary of the Animas River, eventually causing an estimated three-hundred million dollars in damage to Navajo Lands.  The Obama appointee who oversaw the spill was not forced to resign.

In California, under the Region 9, San Fernando Valley, home to the film and television industry, sits on top of the largest plume of toxic groundwater in the country.  The plume is partially made up of Trichloroethylene (TCE) and has a vapor intrusion risk, in which TCE vapor rises through the soil and gathers inside structures.  TCE has been shown to cause cancer and genetic mutations.

In spite of sending repeated press request to Region 9, asking them to inform the public of the vapor intrusion risk, Region 9 has failed to act, leaving a whopping 1.3 million residents potentially exposed to cancer-causing chemicals.

The Region 9 EPA has also failed to respond to our requests about the poison drinking water in Barstow, California, only 14 miles from Hinkley from the film Erin Brockovich, which has left residents covered in rashes and blisters, leaving many mothers to slather their babies in cortisone just to get them to sleep at night.  A patient education expert we consulted stated that putting cortisone on babies has the adverse effect of damaging their immune system and making them more susceptible to diseases like Lupus, later in life.

While many media outlets have made Trey Glenn scandal a matter of partisan politics, the record reflects that no matter which party has controlled the White House, The US EPA has repeatedly endured scandal and allegations of corruption.

The EPA’s Inspector General’s Office has done very little to hold these officials accountable, along with a virtual blackout of coverage from the US media.

Pointing fingers, and assigning blame to a particular political party, negates the fact that The Superfund – and the US EPA in general – is a malfunctioning government program, that has enjoyed virtually no oversight from the government and US media.

This writer is also the founder of SuperfundResearch.org, an EPA watchdog group that spent many years, and hundreds of thousands of dollars, fighting to cause a reform in the US EPA’s Superfund project, traveling the country investigating Superfund clean-ups.

During my national investigation, I’d contacted thousands of journalists across the country, asking them to write about the Superfund, in which I was able the generate exactly zero articles. I also learned that after meeting tens of thousands of people and speaking with them about Superfund, that the American public has virtually no awareness of the size and scope of the US EPA’s embattled clean-up project.

During the release of my 2013 short film, Poison in the Grapes, about the Summit Equipment and Supplies Superfund site in my own childhood neighborhood, a toxic waste site where the Department of Defense was also dumping unexploded ordinance (white phosphor grenades, and tank and mortar shells) I visited the Region 5 EPA, to ask them to help my community.

Instead of assisting me, they escorted me from the building and later I became the subject of an EPA investigation, in which US EPA Criminal Investigation Division investigator threatened me, and told me they would “come to find me” if I continued to investigate and publish corruption at the Region 5 EPA.

Even though petitions were running on multiple platforms, with thousands of signatures, in a community with a thousand households, and I had visited the Region 5 office, thirteen days after my visit the Superfund director signed off on federal documents, making the statement “There is no concern from the community.”

A year after the release of my short film, in 2014, I returned to Ohio to appear on WEWS-ABC News, in Cleveland, along with several members of the community, to demand action from the Region 5 EPA, only ten days before Flint made the infamous water switch that later became the Flint Water Crisis.

Instead of publishing the subject matter we were interviewed about, Cleveland investigative reporter Joe Pagonakis re-edited the interview to make it appear that he’d asked us different questions and then published a completely false statement from the Region 5 EPA’s press office, once again shooting down the cause.  From personal experience, watching a major media outlet lie on behalf of the federal government is one of the most patently disturbing feelings a human being can experience.

Only eight months after I was investigated, the Region 5 Administrator was forced to resign over Flint, finally revealing that my allegations of corruption at Region 5 were 100% true and based in reality, even though by this time I had been branded as a “right-wing anti-government nutjob,” in spite of being a card-carrying Democrat, my entire adult life.

In 2017, I filed complaints with the US EPA Inspector General’s Office over the entire series of events.  They assigned a “hotline number” to the case, collected no evidence from me, and then closed the investigation, with no resolution.

Only last week, I contacted the US EPA’s Press Office, asking Region 5 to correct the record, concerning the false statements made by their office, in 2014.  Enesta Jones, a press liaison for the US EPA responded by forwarding the matter to multiple Region 5 EPA employees, along with my request for grant funding to conduct an independent investigation into the Superfund site I played in, as a child.

Since then, I have received no response, a direct symptom of the fact that there has been no real effort to hold EPA official accountable for their corruption.

Officials like Trey Glenn are empowered to commit acts of corruption, with virtually no fear of being punished, because they know that there is no one making any form of real effort to hold them accountable.  That Glenn is being held responsible is nothing more than a fluke of The Universe, in my opinion, and his charges in no way exemplify the way corrupt EPA officials and employees are treated, in general.

What I’ve endured, over my thirteen-year battle to help my neighborhood, was only a small part of the systematic corruption and mismanagement at the US EPA.  Since 2014, I’ve traveled to hundreds and hundreds of toxic waste sites, only to find the same series of events playing out at Superfund sites all over the country.

It seems that the US media has only been interested in acts of corruption committed since Trump took office, in 2016, even though one of Bill Clinton’s main initiatives during his presidency was Superfund reform.

Many Democrats have become aware of the flaws within our party, and want to see change, but until we look inwardly and admit that the recent wave of EPA corruption scandals are not a problem of Republican leadership, no matter who is in office, EPA scandals like the one playing out in Alabama will continue to happen.

There are currently 1,338 Superfund toxic waste sites on the US EPA’s National Priorities List.