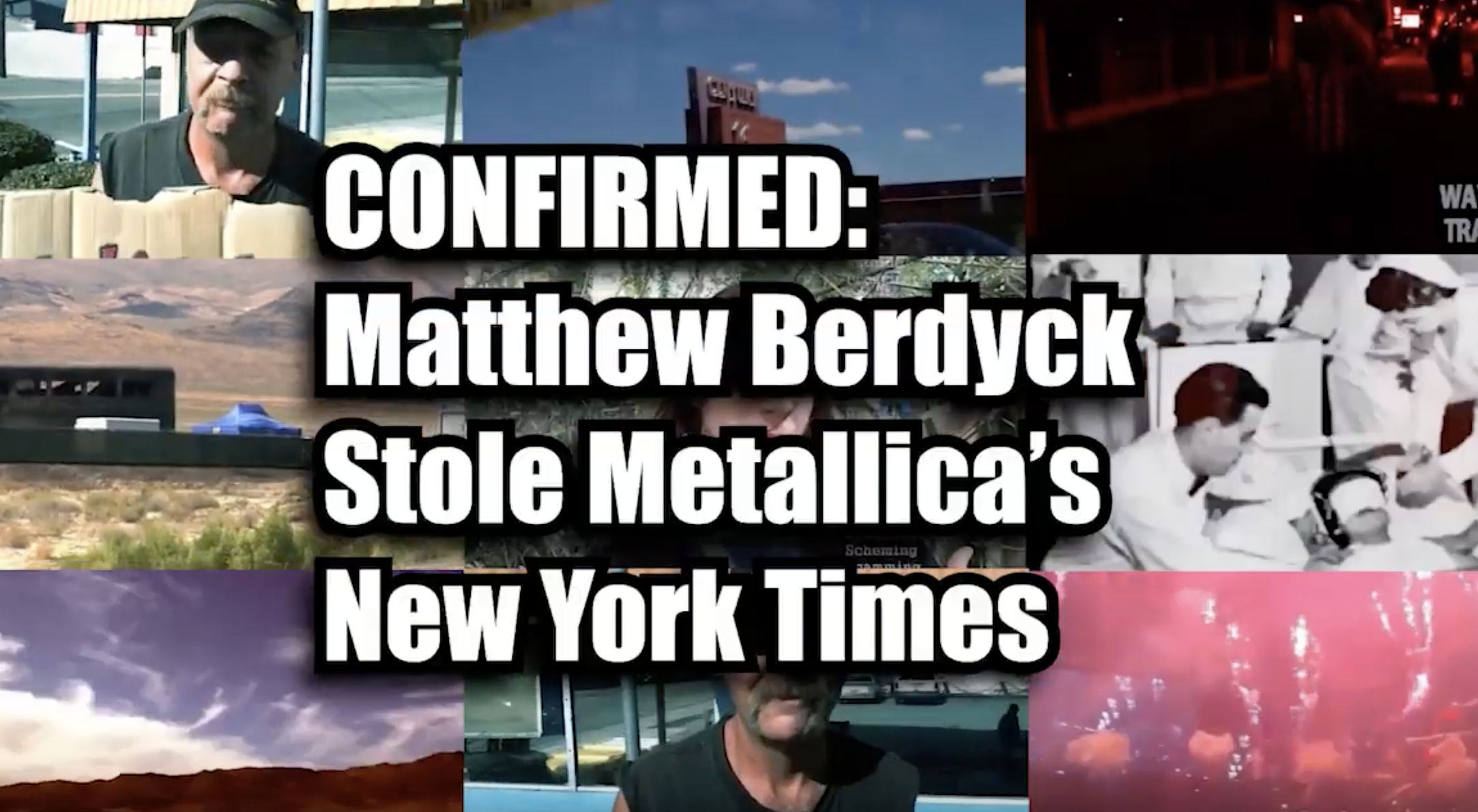 SAN FRANCISCO, California – The story of how I came to acquire Metallica drummer Lars Ulrich’s New York Times has become the stuff of internet legend.  “Is that true?  Did Lars Ulrich really let you steal his newspaper from [Metallica’s recording studio] HQ?”  Some have even gone as far as to say it never happened, even sending harassing e-mails to Metallica’s management, Q Prime, demanding answers, posting blogs saying, “This is just another scam from Matt.”

The only problem with these internet troll statements is that I have the entire thing on film, but never released it because I thought it was funnier to make people wonder what was really true.  Finally, I’ve decided to release the footage, in the interest of correcting the record once and for all, settling a years-long debate, “Is that really Metallica’s New York Times?”

A few years ago, I went to go visit Metallica’s recording studio, HQ, just because I wanted to see it.  I’m a big fan of Joe Berlinger’s documentary, Some Kind of Monster, the ill-fated attempt to document the recording of a never released Metallica album, interrupted by infighting, James Hetfield’s rehab, Newsted’s departure from the band, and the entrance of Phil Towel, the infamous heavy metal therapist that kept the band together and invigorated new life into the thrash metal mega-giants, culminating in the release of everyone’s favorite snare drum sound, St. Anger.

Once I’d located HQ, which was not too far from my house, I took an initial trip to go check out the scene.  Their studio turned out to be a modest former industrial building located in a quiet neighborhood, situated directly across from the heaviest metal thing of all, an elementary school.

As soon as I pulled up, I’d immediately recognized the building, with its brick white interior and dark tinted windows.  Further confirming this fact was a crack in the gated entrance way where one could clearly see the very same graffiti that Hetfield had painted on the side of the building, in Some Kind of Monster.

While I was there, i was ecstatic. I love Metallica so much I was honored to just meet their building.

As I wandered around the exterior of HQ, I noticed that there were a few copies of the New York Times, lying on the front sidewalk.  My first thought was that I wanted to steal one of them and keep it as a souvenir but I immediately reconsidered because I don’t know Metallica and at the time I was making music videos.

I didn’t want to end up five-years down the road and lose an opportunity to work with Metallica when Lars looked at me and said, “You’re the fucking guy who stole my fucking newspaper!”  One never knows.

I’d basically chickened out.  And for the next year of my life, I completely regretted it.

Shadows Of The Cross For an Outlaw Torn

For the next year of my life, I continued to travel the country, baring this cross of not stealing that newspaper, feeling as if I was legally required to tell everyone I met what I pussy I was.  Seemingly, I have no fear of fighting the federal government, exposing toxic groundwater plumes, cancer clusters and every other form of corruption I could find, but for some reason, I was too spineless to steal a damn $1.00 worth of newsprint.

As I’d meet each new person, I’d say, “Let me tell you what kind of pussy I am for not stealing Metallica’s newspaper.” For me, it was my albatross,  like dragging a giant cross around, an internal struggle between good an evil.  Should I have not made the apparently right decision or should I have begun a long and prolific as a hardened career criminal newspaper thief?

What if they’d called the police and I ended up in prison?  How could I explain to my cellmate who stabbed and sodomized 47 nuns, that things got real the moment I newsprint jacked Lars Ulrich’s NYSE stock report? I’m almost absolutely sure his response would have been, “Yeah, you’re absolutely picking up the soap in the shower later and getting stabbed.  By the way, were you ever a part of a convent?”

And so it went, from town to town, from person to person, everyone I encountered heard the tale of my shame, to the tune of thousands of people who probably gave no fucks about the story I was telling, until one day when everything changed without me realizing it happened.

For Whom The Bell Tolls

Roughly a year later, I found myself back in the Bay Area, at the downtown San Francisco Guitar Center, shredding out a Metallica song on one of their high-end guitars.  There was this dude from another country sitting across the aisle from me, jamming along with me.  I struck up a conversation with him.  At some point, we realized we were fast friends and took off to up the coast into Muir Woods to find some dinner.  Of course, I said, “Let me tell you what kind of coward I am…”

For the next hour, we joked about what I would do with the newspaper once I’d obtained it.  I envisioned replacing the front page with a different but completely fake headline like ‘Switzerland Attacks Russia’ because you know there is no one around Lars who would question anything he says, so he’d be walking around all day talking about some ridiculous series of events that never happened as everyone around him saying, wide-eyed, “Yes, Lars, the Swiss launching a full-on nuclear assault on Russia is nuts!”

Eventually, we settled on replacing the front page with a photo of Lars holding that very newspaper, with an Inception-like headline that read, “Lars Ulrich Discovers Matthew Berdyck On Cover Of New York Times,” a hilarious photo-in-photo, reminiscent of the scene from Airplane! where Llyod Bridges briefly poses in front a photo of himself in the same pose.

We hung out for a bit, exchanged numbers and that was the last I heard from him, as he was much like me, a habitual road dog exploring the United States.  About a month or two later, I was sitting at home when I got a text notification.  I unlocked my phone to find the single most ridiculous text I had ever seen; it was a photo of the guy I had met at GC, with Lars, that said, “I ran into our friends Lars and he said you could steal his newspaper.”

The Thing That Should Not Be That Eventually Was Anyway

It was past nightfall, the second time I drove up to HQ, but this time, I was about to realize a personal dream of having Lars’ New York Times, without having to resort to egregious and vile felonies, to do so.  For the all the nasty shit that people say about Lars, I think it was a really nice thing to do to part the clouds of his heaven and allow a mere mortal fan to have a small chunk of Metallica real estate, even if it was only a damn newspaper.

I’d read that Lars was a paperboy when he first arrived in LA, so I knew he’d appreciate the value of that item, to me, as I’d also been a paperboy.  Let me tell you how a full grown adult would destroy a kids life if they didn’t get their fucking newspaper!

This time when I showed up, unlike the first time when the place was abandoned, Metallica was actually inside the building, jamming out what would eventually be the new and completely amazing album, Hardwired To Self Destruct.  I couldn’t hear much of anything but the vibrations of the building and the lower frequencies of the bass, the what I heard sounded fucking amazing.

The previous time I’d been there, the newspaper was lying on the sidewalk but this time I found a much thinner daily edition lying inside the fence.  Knowing I had Lars’ blessing, I quickly snatched up the paper and jammed …and Justice for All all the way back to my condo.

As I unwrapped the newspaper, to see the glorious gift that had been bestowed upon me, it was like A Christmas Story’s Ralphie slowly unwrapping his now legendary Red Ryder BB Gun, my eyes aglow with the wonderment of gazing upon the shimmering news rag that would have informed Metallica’s about everything from the Paris Gunman to Ten Reasons Why Everyone Needs Re-Think Their Opinion on Pencil Erasers.

Today, that newspaper travels with me everywhere I go, as a reminder of what one can accomplish if they put their mind to something.  If I told you I was going to get Lars Ulrich to send me a text which allowed me to steal his New York Times, you’d say I was crazy or that it would never happen.  But because I’d stuck to my guns and never gave up, eventually it happened, in spite of all reasonable expectations to the contrary.